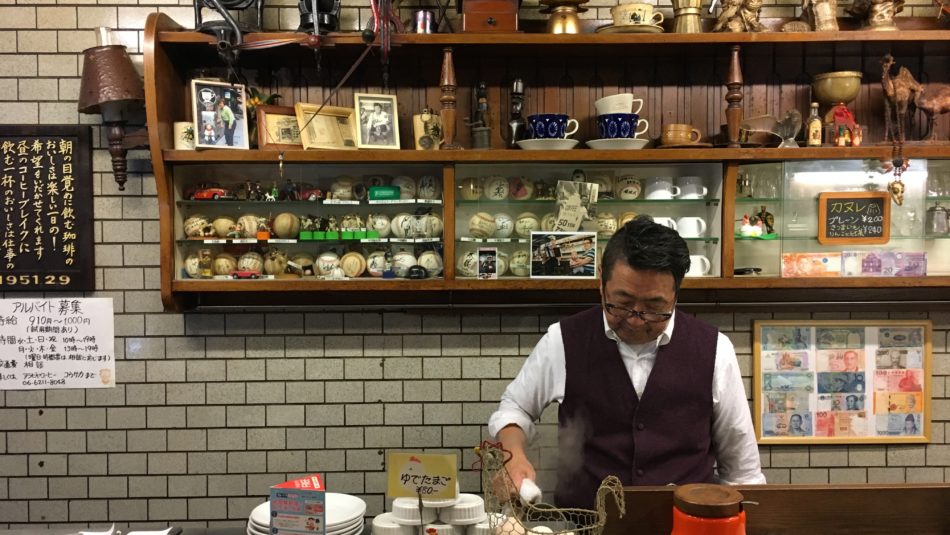 The average cup of coffee in Japan is considerably darker, stronger and more bitter than both the blond roasts of the average diner and much less acidic than our modern standards.

“The fresh smell of coffee soon wafted through the apartment, the smell that separates night from day.” —Haruki Murakami

The first week of November, Liza and I packed up and went on a three week trip to Japan for her father’s 70th birthday. I hadn’t been to Japan in over a decade, since Thursday last played there. In the intervening years, I had come to appreciate the Japanese culture in a deeper and more serious way than I had on my first visit. Their films, art, literature and food had all become staples of my life. In that time, I became utterly obsessed with coffee, its ritual, its politic, its culture. With these twin obsessions in mind, I went to Japan with a secret agenda, quite separate from familial bonding: I wanted to get inside every corner of Japanese coffee. 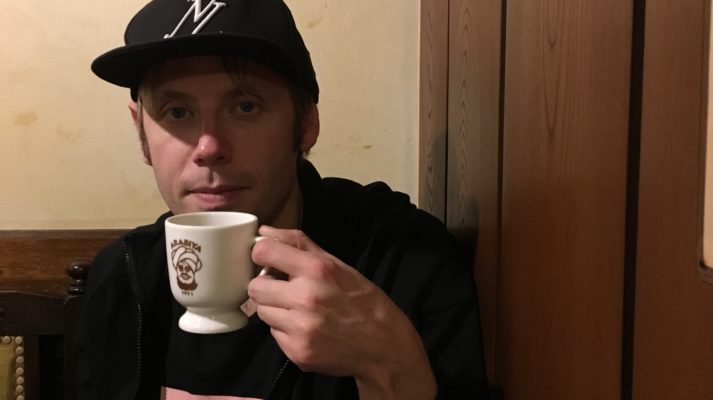 Upon arrival at Tokyo, Narita, I went straight to a vending machine and purchased a hot black coffee in a can, at the urging of fellow travelers. BOSS BLACK had a lethal looking can with a picture of what looked like Stalin(or possibly Tom Selleck) smoking a pipe on the front. It tasted about like it looked: a black punch in the nose of bitterness and smoke. It was magically both harsh and also bodiless. More of a slap than a punch, really. It wasn’t all bad, though. It had a few characteristics of actual flavor and was, after all, HOT COFFEE IN A CAN.

It tasted about like it looked: a black punch in the nose of bitterness and smoke.

Having established a baseline of crap coffee, I looked forward to sitting down in the kinds of smoky— yes, smoky— jazz filled cafes I’ve romanticized through years of reading Haruki Murakami novels. The first time we sat down for coffee, I was not disappointed! We found a small coffeehouse//whiskey bar, that was literally out of the pages of Norwegian Wood. Every inch of the beautiful dark wood bar was covered in manuscript pages and ashtrays, as writers sipped single malt and corrected their papers. Liza got an old fashioned and I had an iced latte. Mine came in a strange goblet but was beautifully layered with dark flavors of vanilla and licorice, betraying a hint of leather.

We walked about ten miles a day, so I stopped to drink a lot of coffee along the way, much of it in the average, nondescript sit down coffee shop, like Hoshino Coffee, a permutation of the kissaten, that has since come to resemble a cookie-cutter reproduction of the classic Japanese cafe. It was like seeing Denny’s try to reproduce a Chatie Hatou—the most famous holdout of Japanese sophistication in cafes— in every neighborhood. Sure, they had the wooden interior, the mirrors, the pour overs and the sweets, but they weren’t able to capture the quiet elegance or the attentive service of a coffee master. As one Yelp reviewer noted (with some incredible help from Google Translate), “It is a large customer of mercenary pancakes, but it is the taste of consent.”

The truth is that you can tell a lot about the coffee of a country by what its midlevel establishments provide. What is the median cup of coffee for Japan? First off, it’s high quality. The average cup of coffee in Japan is prepared in the pour over style, rather than batch brewed, which already means you don’t have to worry about the kinds of stale, rancid coffee you find in roadside America. Secondly, most offer a house blend, a premium blend and several single origins. Many establishments, like the popular Inoda Coffee in Kyoto (which has one location with an incredible circular 50’s style bar), rate the coffees according to levels of Bitter, Sour, Strong and Sweet.

The average cup of coffee in Japan is considerably darker, stronger and more bitter than both the blond roasts of the average diner and much less acidic than our modern standards. At first, the effect can be to make all the coffees taste similar: dark chocolate, raisins, tobacco, roasted malt. But after acclimating for a week or so, I was able to adjust my palate and taste the difference between a smoky Brazilian and a sweet Costa-Rican, even when roasted and brewed in a dark traditional style.
I don’t mean to make it sound like the coffee scene of Japan is stuck in the past. Indeed, the third wave is flourishing in Tokyo and I had delicate Ethiopians, roasted by SWITCH, at the tiny cafe, Dear All, in Sasazuka. I had the strange sensation of sucking on a lemon drop candy, complete with the stunned feeling you get in your taste buds. At the 3rd wave mecca, Nozy Roasters, we spoke to the head barista, at length, after trying their Honduran espresso, with its sweet, nutty finish. He took me to the back, where they offer a slower experience with single origin pour overs. We tried the house blend as well as the Brazilian, and a Grace Honey Costa Rican which had a pleasing rum raisin, brown sugar aftertaste.

The owner said laughed and said “no milk, no sugar– better black.”

I found incredible little coffee shops hiding behind dive storefronts at every turn.  In the market street, leading to the Senso-Ji Temple, I cursed under my breath when a hole-in-the-wall coffee shop charged me 700 yen for a cup that I only bought so I could use the bathroom.  Watching him lasso a beautiful glass coffee siphon for five minutes didn’t help.  When I finally tried the coffee, my eyes went wide.  The owner laughed and said “no milk, no sugar– better black.”  She was right! It was incredible!

At Shinjuku’s hip 4/4 Seasons we sat in a raw white space, hanging out next to the roaster, where they finish all their coffee, filling the small space with fragrant coffee scents. There, I tried an overly acidic Guatemalan that mellowed into an overripe strawberry flavor with a pretzel finish, but lusted after a fragrant, perfectly sweet Costa Rican that Liza’s sister got. It was front-loaded with peaches and tea flavors and finished with a mellowed brightness. I definitely enjoyed the 3rd wave coffee I had in Japan… and their barista’s are the most exacting I’ve seen anywhere in the world. But, overall, I was disappointed that it was so similar to the coffee I can find in Brooklyn, leaving little reference to the storied history of Japanese coffee excellence.

So when we came to the standup counter Koffee Mameya, tucked away in an architectural jewel box on the outskirts of Jingūmae in Tokyo, it was like discovering a long lost city of Atlantis.  The attention to detail was so precise, the coffee preparation so exacting, that I could have spent hours leaning over the counter just asking questions.  Each offering was bagged and placed on one of thirty-six, small, box-shaped shelves. The presentation of the shelves formed a grid.  At one end of the grid, along the x-axis, was light roast.  On the other end, dark.  The y-axis was organized, coffee by region.  The barista talked about coffee with me,  philosophically, finding out everything I loved, before pouring me a cup.  I had several but the most pleasing thing I tried was a Guatemalan cold brew from Los Lomas.  It struck the perfect balance between sweet and bitter.  A candied grape plum jam, spread across a chocolate coated graham cracker.  As it mellowed with the melting of the ice, cream and malt flavors developed.

So when we took a seat in the hidden gem of Cafe De L’Ambre, the past and the future of coffee came together in a most delightful and unexpected way. The place has the look and feel of an old and very regal kissaten. The owner Ichiro Sekiguchi is over 100 years old. But Sekiguchi has been pushing the leading edge of coffee forward, always forward, since 1948. People credit him with many of the innovations that led to modern coffee culture: from bean selection to roasting techniques. One innovation that hasn’t caught on anywhere else is aged coffee: I tried a ten year Ethiopian and an 11-year “mocha blend.” Both were revelatory, containing flavors that should have been offensive. Moss, wood, smoke. Elemental flavors that gave way to sweetness, depth. Light and dark combined in earthy cups. It was worth the plane ticket alone. Liza had the blank et noir, a small cocktail glass of concentrated black coffee with a suspension of condensed milk on top. It was 1100 yen. If it wasn’t I would’ve ordered 100 of them on the spot. One sip yielded bitter onto sweet in such staggering extremes that it was a gymnastic feat in a glass. It feels like a bold move, rather than a concession to the Frapp crowd. And who doesn’t love ending with a little something sweet?

NEXTCoffee. Curated.: A Recommended Guide to Our Favorite Desserts to Enjoy with Coffee in NYC